This blog post on BumbleBee malware was originally published as a FLINT report (SEKOIA.IO Flash Intelligence) sent to our clients on June 02, 2022.

BumbleBee is a new malicious loader, first reported by Google TAG in March 2022, that is being used by several Initial Access Brokers (IABs) to gain an initial foothold within victims’ networks.

In recent weeks, many campaigns distributing BumbleBee have been observed in the wild and the successful compromises often lead to ransomware attacks. Indeed, affiliates of several ransomware gangs (Conti, LockBit, AvosLocker, Diavol) were observed delivering BumbleBee in order to drop another payload (Cobalt Strike, Meterpreter, Sliver, IcedID, Redline, and more) and deploy ransomware. Furthermore, SEKOIA.IO analysts observed the malware is still in development with new features, and improvements. All these reasons make the BumbleBee loader a major threat that companies must deal with at the moment.

SEKOIA.IO analysts have been tracking this threat since early April 2022 and have seen a significant increase in the number of active BumbleBee C2 servers, and observed samples. The analysis of multiple BumbleBee samples allowed us to identify several versions and improvements made to the product.

In this section, we briefly describe the typical infection chain used to deliver the BumbleBee loader. We then share technical details on the modifications made in the latest versions of the malware, and how we track the active C2 server and the malware samples.

Before getting into the technical details, the BumbleBee malware is a sophisticated loader that aims to download and execute a second payload. It implements several defense and evasion techniques to hide from detection systems, and to make it harder for security researchers to analyze the payload.

Most of the spearphishing campaigns distributing the BumbleBee loader use the same attack pattern: an email is sent to the victim with a ZIP archive which contains an ISO file. The beginning of the attack chain consists of using an ISO file which contains a Windows link (LNK) used to execute the payload (DLL).

In the following example, the ISO file contains two files:

As shown in the figure below, when the LNK file is executed, it runs the command below to start the malicious DLL using rundll32.exe: C:\\Windows\\System32\\rundll32.exe procsvc.dll,HWgullOFkZ 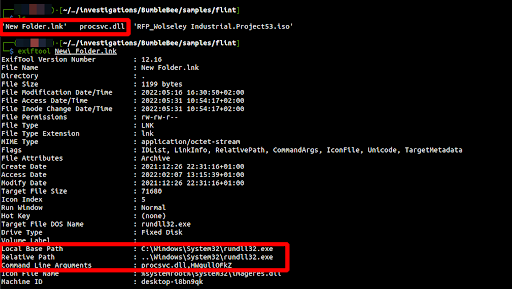 This infection vector is more and more used by various actors: APT (such as NOBELIUM) , IABs (to distribute IcedID, BazarLoader, BumbleBee, and more) and other threat actors. This trend appears to be the consequence of the disabling by default of VBA macros in Microsoft Office products, which is one (code execution via Office macros) of the most used techniques by adversaries to get into the network.

Modifications in the latest version

The BumbleBee DLL uses a crypter to deobfuscate another PE that is loaded in a new memory section. This specific section is quickly identifiable: a simple pattern search in a debugger on “DOS mode” can highlight the newly allocated memory with read-write-execute permission.

Once the new section is dumped, the BumbleBee payload can be analyzed. Before anything else, it is worth noting that the malware used almost a full copy/paste of al-khaser github project, as mentioned in others articles or related BumbleBee discussions. The al-khaser code implements several anti-detection techniques. The figure below shows that the main function of the BumbleBee payload avoids execution if one of the anti-virtual environments is spotted. Once the loaded PE is ready and anti-VM checks are passed, the malware decrypts its Command and Control (C2) IP addresses with a key stored in cleartext in the .data section using RC4 algorithm. This decryption routine is also used to deobfuscate its campaign ID.

In most of the payloads we investigate, three blobs of data are obfuscated using RC4:

Figure 4.  Recipe in CyberChef to get the obfuscated data

Once, the C2 IP addresses have been deobfuscated, the malware contacts one of its C2 and then loads the final payload (Meterpreter, Cobalt Strike, or else).

In the initial BumbleBee versions analyzed in April 2022, the malware did not implement any C2 obfuscation: the IP addresses were stored in clear in the PE. This evolution shows that BumbleBee is still under development.

NB: We observed a massive usage of the key “BLACK” in the dataset of samples we analyzed and also the key “iKInPE9WrB“.

The heuristic results have increased, from 5 C2 servers at the beginning of April to over 130 at the time of writing this FLINT, as shown by the following figure. 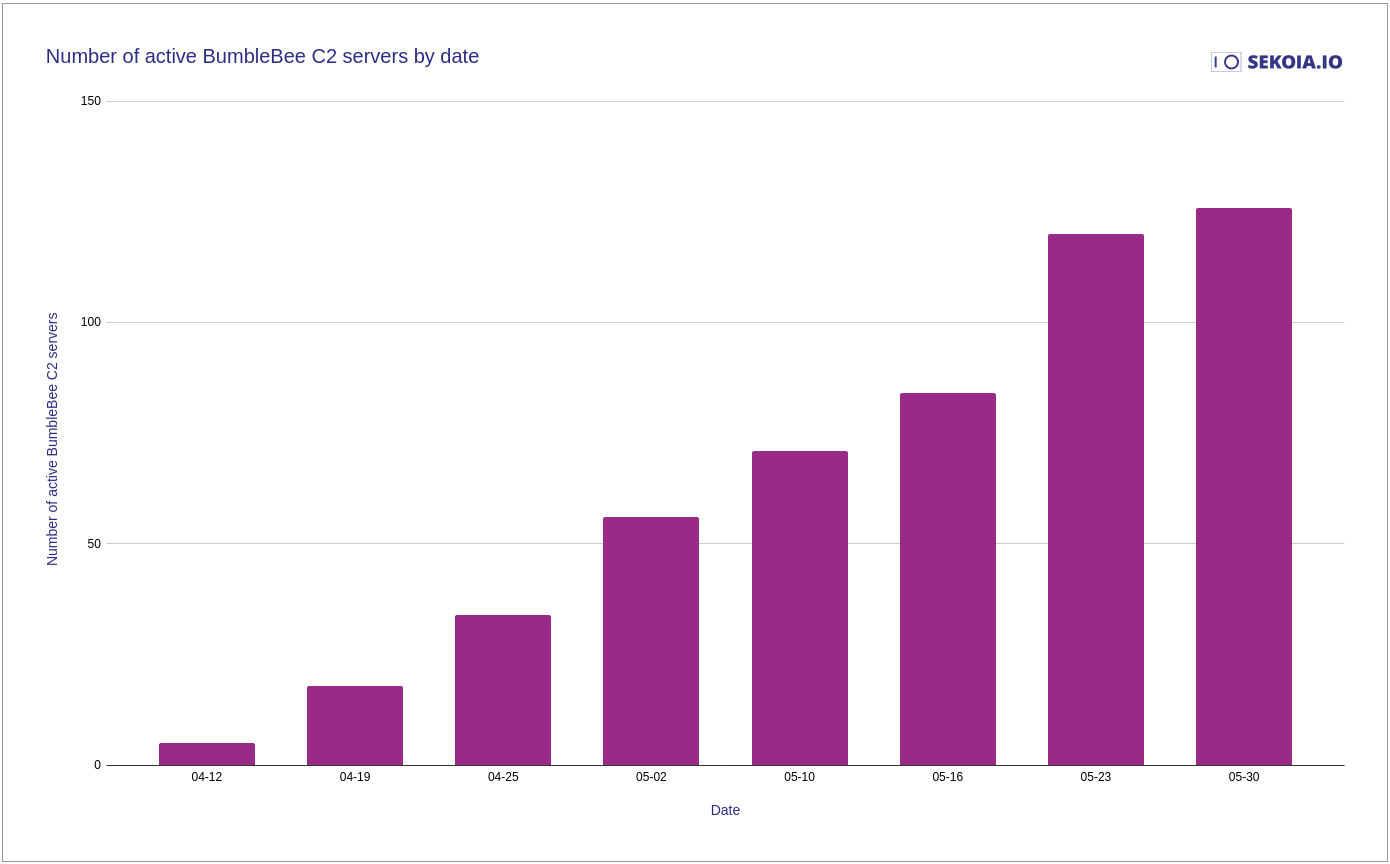 This shows that the BumbleBee loader has gained in popularity among the threat actors, particularly for the Initial Access Brokers.

At the same time, we have written a YARA rule to find BumbleBee samples – it can be found in the section of IOCs & Technical Details. The results of the YARA rule uploaded on a sample sharing platform confirm the trend described previously.

BumbleBee has become in two months a major threat, mostly deployed by Initial Access Brokers to gain a foothold within a network and drop a second payload. With the malware being used by affiliates of ransomware gangs, companies need to monitor this threat and protect their assets from possible BumbleBee compromises.

You can also read our article on:

Chat with our team!

Would you like to know more about our solutions? Do you want to discover our XDR and CTI products? Do you have a cybersecurity project in your organization? Make an appointment and meet us!

This blog post on CALISTO threat actor is an extract of a FLINT report (SEKOIA.IO Flash Intelligence) sent to our...

Raccoon Stealer v2 – Part 1: The return of the dead

Raccoon Stealer was one of the most prolific information stealers in 2021, being used by multiple cybercriminal actors. Due...

This blog post is a technical analysis of the new Raccoon Stealer 2.0 stand-alone version. Authors have announced that...